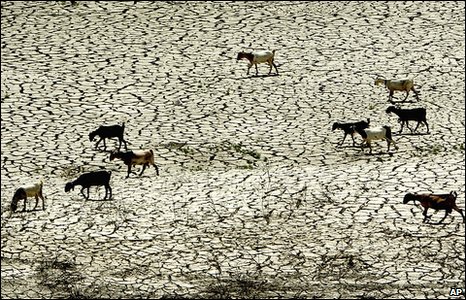 Water has been rapidly disappearing in Cyprus since the 1970s, but conflict between Turkish and Greek communities means fixing the problem is not high on the political agenda. Alex Bell finds that Cypriots are now struggling for control of land that is slowly dying.

Here is a story: an old man from the Troodos hills of central Cyprus rises to his feet at a public meeting about the environment. He says that when he was young, his school teacher asked the class who could swim, and about half the hands went up.

Then the teacher said: "Who has been to the beach?" and this time, only two hands went up.

The moral of the story? I'll come back to that in a moment.

We are in Nicosia, one of Europe's last divided cities, and the focus of a bitter and bloody feud between Greek Cypriots and Turkish Cypriots.

It goes back to 1974, when the island was divided, as Turkish troops invaded - following a collapse of the Cypriot government.

It goes back further, to 1963, when the UN mission began here - never to leave as it tried to keep the sides apart.

It goes back further still, to 1960, when the British left - knowing, surely, that claims of peace on this Mediterranean island, tucked in the armpit between Turkey and Israel, might never come to bloom. It keeps on going back and back…

I am here to cover a war - but not the one that has seen shabby oil drums erected in higgledy-piggledy piles as barriers dividing the city.

The war I'm interested in is the water war - not an armed conflict, but a struggle nonetheless, between people and a rapidly disappearing resource.

The alarming thing, for those working to ease this new conflict, is that Cypriots don't even seem to realise that hostilities between them and nature have begun.

Charalampos Theopemptou is the Greek Cypriot side's Environment Commissioner, and it was he who told me the story about the old man in the classroom. He explains its meaning: that within living memory Cyprus was wet - there were plenty of rivers and lakes to swim in. Now, they are all gone.

The island has reached what geographers call Peak Water - when demand meets and then outstrips supply.

Peak Oil is already a familiar concept, and commands international attention. However, water, despite being central to life, is having a much harder time getting on to the political radar.

Dig into the details of the current war and it seems to have less to do with fighting than it does with land.

The issue that stalls peace talks is the question of houses and farms that were seized in the 1974 conflict. On both sides, people would like their houses back, or a cheque in compensation.

The gradual effect of increasing wealth, EU membership for the south, and the opening of the borders, has defused tension, and means that the eternal subject of property prices is now at the heart of the issue.

The irony is that the Cypriots, all of them, are fighting over land, which is slowly dying.

The famous trees of Cyprus are rotting on their waterless roots, turning to dry kindling as they stand in the blazing sun.

Ever since the 1970s, rainfall has been scarcer, meaning far less water reaching the reservoirs.

For the past four decades, getting enough water to the farms and the people has been a struggle.

The general dampness of nature is drying up, like a rag that is being wrung ever tighter.

This is why the European Commission believes Cyprus is the canary in the coalmine: what happens on this island is threatened to happen all across the drier parts of the continent.

Experts agree that this crisis can be tackled, but first you have to recognise it's there - and that's part of the problem.

Even the proposed solutions can be problematic.

Nicos Vassillou is a small man in his 70s with decades of experience planning and consulting for the Cypriot government. You might also call him a visionary.

He believes he has a way to solve Cyprus's problems in one fell swoop - a plan for a pipeline from the Turkish mainland to Cyprus, which will not only meet current demand, but also supply extra to irrigate the parched fields.

As we talked in a hotel lobby, he painted me a picture of the island transformed back into a verdant paradise and one where peace might reign.

But the Cypriot government is sceptical - not least because this plan would hand control of the water supply to Ankara, its sworn enemy. And it seems that it still can't quite believe the water will really run out.

It has put its money behind de-salination plants, powered by oil-fired electricity stations, which it hopes will supply the cities with water by 2012.

It has also regularly imposed water rationing - but has turned its back on water conservation and recycling schemes, or even fixing the leaking water pipes.

The irony is that Cyprus is already considered a kind of paradise by many people - its main business is tourism, and selling property to north Europeans looking for a warmer life.

The question is, will anyone want to come and swim here at all if the holiday resorts are no more than manufactured oases within a desert?

While the real, political war steals the headlines for now, the water war is threatening to steal the future of a place once known as the Green Island.

How to listen to: From Our Own Correspondent