The European Commission has just closed a decade-long case against Ireland for multiple and systemic infringement of the EU Waste Framework Directive.

To comply with the 2005 European Court of Justice ruling, Ireland has implemented a root-and-branch reform of waste-enforcement operations across all local authorities, closed illegal landfills and provided the finance to restore or compensate for degraded land. This major exercise has transformed the waste sector in Ireland and, with both parties now happy with the outcome, provides useful lessons to other countries.

“Problems were being reported from all parts of the country.” European Commission official

The Commission started to receive complaints from Irish citizens and organisations in the late 1990s, reporting illegal landfills and vehicle scrapyards, with no progress from appeals to their local authorities.

Ireland’s local authorities were still habitually dumping domestic waste on ‘tip-heads’ at the edge of towns and cities. There was nothing to stop pollutants entering the soil and water, and many of the sites were in wetlands with a high nature value. The Commission urged the Irish authorities to move quickly to close the landfills.

But years passed, and the problem got worse. “Problems were being reported from all parts of the country,” recalls a Commission official. Offenders were rarely pursued, and fines were so paltry (in one case EUR 100, compared to EUR 1000 to apply for a waste-site permit) that they were no deterrent anyway. Meanwhile, large volumes of Irish domestic waste were being dumped illegally across the border in Northern Ireland (UK), and the number of illegal vehicle scrapyards exceeded 340. It was as if the End of Life Vehicles Directive had never happened.

The final straw for the Commission came with a landfill in Tramore, Waterford County, next to a wetland of international importance. The Irish Environment Protection Agency took four years to process a licence for the landfill, while the tip grew larger, encroaching further into the wetland.

So the Commission took Ireland to court for the first-ever case of a systemic breach of the Waste Framework Directive. The mass of evidence had pointed to a serious failure of governance. There were 12 sites in the original case, but as the scale of the problem was uncovered, it was extended to cover 42 separate cases.

The judgement on 22 April 2005 focused minds and prompted a swift change of approach. Pat Fenton was assigned by the Irish government to manage the response to the judgement. “When I saw the case I thought, ‘My God, most of these are indefensible’. You can’t argue that it’s not a case of systematic failure.”

The challenge, he says, was how to turn it around and to an advantage (see article, ‘The case for Ireland’). Fenton, working in the Environment Ministry, coordinated the enormous programme of reform. This included the creation of an enforcement network across the country to support the recruitment and deployment of new officers to tackle illegal waste. It brought the first serious criminal prosecutions against perpetrators. And it dedicated the financing needed to clean up or compensate for damage at illegal landfill sites, using a levy to pay for enforcement costs. The number of vehicle scrapyards fell from around 340 to four.

One vital element in closing the case was a programme of measures agreed by the Irish government in 2012. The document, updated every six months, detailed steps being taken to comply with the judgement. With Ireland's decisive and structured approach, the Commission was satisfied that consistent progress was being made.

The costs were significant – around EUR 300 million – especially at a time of austerity, but they could have been higher still. If Member States fail to comply with a judgement, the Commission can at any point take them back to court and ask for fines of up to EUR 10 million every six months.

“Back from the brink”

“We started out with a situation where people were complaining bitterly to us,” recalls a Commission official. “It shows that with some organisation and determination by the Member State it is possible to come back from the brink to an outcome where most of those involved in the case are now broadly happy with how it has been handled. We get very few complaints these days.”

As the final pieces have now fallen into place, the Commission has decided to close the case.

The illegal landfill in Tramore had filled an area of salt marsh wetland so entirely that the Commission demanded compensation. To create a ‘compensatory wetland’, the local authority purchased a separate piece of land nearby and let the sea flood it so that wildlife benefits lost to the landfill could be regained elsewhere. A place described by EU observers as an environmental “disaster” a few years back has thus been cleaned up and supplemented with a new wetland.

From abandoned steelworks to public park

Haulbowline is the last site to be cleaned up within the framework of the case. The former steelworks on an island in Cork harbour was closed and abandoned in 2002, with breaches in the sea wall allowing pollutants to disperse into the local environment. A slag tip had added 20 acres to the island. The site was a “massive problem”, according to Commission officials, and a source of major concern to the local population. Now, after a complex administrative process, it will be cleaned up and transformed into a public park. Transparency was key to a good outcome for this site. The local authority created a web page to keep the public informed of progress and to deal with issues as they arose during the transformation. 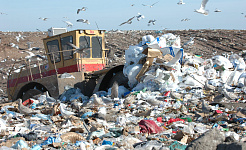 23/10/2015 Article taken from: Magazine Environment for Europeans The European Commission has just closed a decade-long case against Ireland for multiple and systemic infringement of the EU Waste Framework Directive. To comply with the 2005 European Court of…